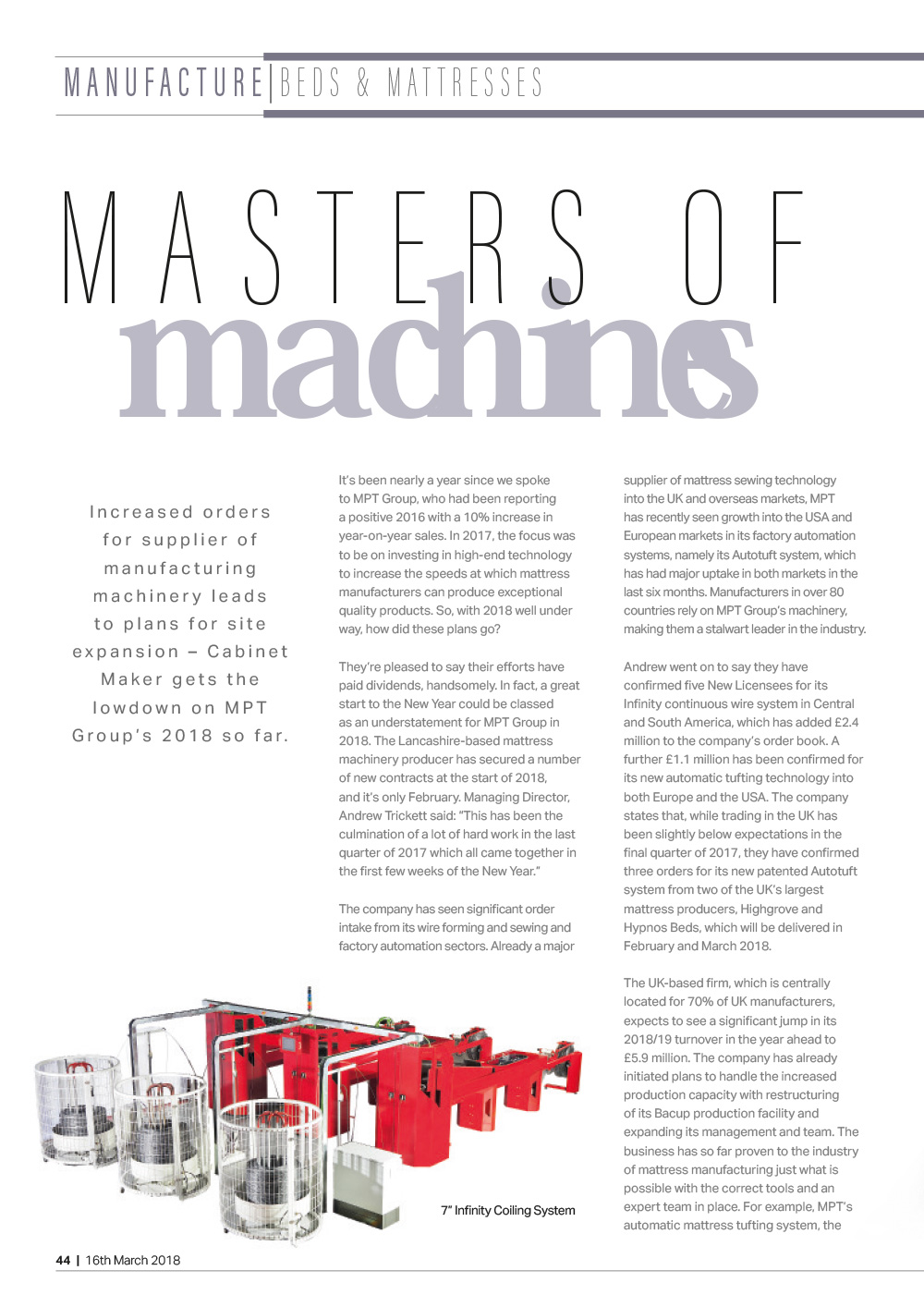 It’s been nearly a year since we spoke to MPT Group, who had been reporting a positive 2016 with a 10% increase in year-on-year sales. In 2017, the focus was to be on investing in high-end technology to increase the speeds at which mattress manufacturers can produce exceptional quality products. So, with 2018 well under way, how did these plans go? They’re pleased to say their efforts have paid dividends, handsomely. In fact, a great start to the New Year could be classed as an understatement for MPT Group in 2018.

The Lancashire-based mattress machinery producer has secured a number of new contracts at the start of 2018, and it’s only February. Managing Director, Andrew Trickett said: “This has been the culmination of a lot of hard work in the last quarter of 2017 which all came together in the first few weeks of the New Year.” The company has seen significant order intake from its wire forming and sewing and factory automation sectors. Already a major supplier of mattress sewing technology into the UK and overseas markets, MPT has recently seen growth into the USA and European markets in its factory automation systems, namely its Autotuft system, which has had major uptake in both markets in the last six months.

Manufacturers in over 80 countries rely on MPT Group’s machinery, making them a stalwart leader in the industry. Andrew went on to say they have confirmed five New Licensees for its Infinity continuous wire system in Central and South America, which has added £2.4 million to the company’s order book. A further £1.1 million has been confirmed for its new automatic tufting technology into both Europe and the USA. The company states that, while trading in the UK has been slightly below expectations in the final quarter of 2017, they have confirmed three orders for its new patented Autotuft system from two of the UK’s largest mattress producers, Highgrove and Hypnos Beds, which will be delivered in February and March 2018. The UK-based firm, which is centrally located for 70% of UK manufacturers, expects to see a significant jump in its 2018/19 turnover in the year ahead to £5.9 million.

The company has already initiated plans to handle the increased production capacity with restructuring of its Bacup production facility and expanding its management and team. The business has so far proven to the industry of mattress manufacturing just what is possible with the correct tools and an expert team in place. For example, MPT’s automatic mattress tufting system, the AutoTuft, is capable of tufting in excess of 200 mattresses in an eight-hour period. Similarly showing a need for speed, its new BordaTac S2 offers 4 tack simulated side stitch borders in a remarkable 50 seconds per meter making it a class leader. The new Infinity Sleep Support System, a premium coil count spring unit now set to take Latin America by storm, with increased coil counts and unit height of 7” and saves 45% on manufacturing materials cost.

The company will also be announcing, over the coming months a series of new innovations to market, which will be phased in over the next two quarters, further strengthening its position as the “go to” company for mattress manufactures both in the UK and overseas. Its wire forming division also expects to sign two further licensees for South America shortly for its continuous wire technology in further adding to the company’s already impressive order book. With a range of machinery that caters for all areas of mattress manufacturing, we’re sure that even more deals will be on the way for this supplier who offers a machinery solution for every part of the mattress manufacturing process.